Barcelona in the Champions league quarter finals after their victory against Napoli. 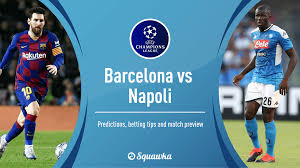 Barcelona has gotten into the champions league quarter finals after their 3-1 victory against Napoli in the second leg.

Quqiue Setien’s side will now face Bayern Munich in the last eight on August 14, in their 13th consecutive Champions League quarter final appearance.

Despite ending as 4-2 aggregate winners, it was not all plain sailing for Setien’s side, with Dries Mertens inches away from putting the visitors in front in the opening stages.

Lionel Messi made it 2-0 on 23 minutes, as he finds his ways into napoli's box ti have the goal

The first half ended in dramatic fashion, with Messi having a goal ruled out by VAR for handball, before both sides were awarded penalties in added time.

Luis Suarez put the home side 3-0 in front, after a foul on Messi, but Lorenzo Insigne handed the Serie A side a lifeline as he tucked home from the spot.

Napoli took the game to Barcelona after the break, with Insigne forcing a smart reaction stop from Marc Ter Stegen.

Gattuso brought on Arkadiusz Milik and Hiving Lozano in the closing stages to inject some attacking intent into his side, with the latter twice hitting the woodwork.