Chelsea forward, Willian has agreed to join Arsenal for £100,000-per-week. 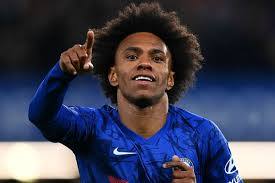 Chelsea forward, Willian has  agreed to join Arsenal on a three-year contract worth £100,000-per-week.

The 31-year-old Brazilian international decided to end his seven-year spell at Stamford Bridge after Chelsea refused to offer him a three-year deal he had demanded.

Although, Blues boss Frank Lampard was keen to keep hold of the winger but Chelsea’s hierarchy only wanted to offer Willian a two-year extension.

ESPN have now reported that Willian’s switch to Arsenal is done deal and is expected to be officially announced by both parties once the Blues’ Champions League campaign concludes at the end of the month.

Willian who joined Chelsea from Anzhi Makhachkala in 2013, won two league titles, the FA Cup, the EFL Cup, and the Europa League.