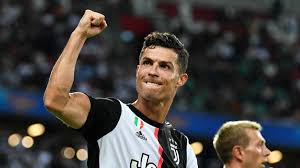 Juventus star Cristiano Ronaldo has done it again by breaking the clubs record for most goals in a single season on Friday with his double against Lyon in the Champions League.

The Bianconeri went into the clash needing a positive result to advance to the quarter-finals, having gone down 1-0 in the last-16 opener all the way back in February.

And their task was made even harder when Memphis Depay converted in style from the spot after Rodrigo Bentancur gave away a contentious spot-kick.

With Ronaldo in the team, however, there is always the potential for goals, and the Portugal captain proved as much by netting at the end of the first half to keep Juve in the tie, Goal reports.

The ex-Manchester United and Real Madrid man had come close with a free-kick just minutes earlier which forced a fine save from Lyon No. 1 Anthony Lopes.

Juve were then given another chance from a close-range set piece, fired into the wall by Miralem Pjanic.

Referee Felix Zwayer, though, spotted a handball from Depay and pointed to the spot in a decision every bit as polemic as that which led to the Lyon striker’s opener.

And there was little doubt over the outcome as Cristiano stepped up, the forward this time sending Lopes the wrong way to pull back the scoreline to 1-1.

It was Ronaldo’s 36th goal of the season for Juve in all competitions, with 31 coming in Serie A, three in the Champions League and two in the side’s victorious Coppa Italia campaign.

Ronaldo would break the record in the 60th minute, scoring his 37th goal of the campaign. The Portugal star picked up the ball on the edge of the box and blasted a shot from distance that Lopes could only get a touch on as it went in.

That strike was enough to write the 35-year-old into the team’s history books as their highest all-time scorer over a single season.

The record had been held for more than 80 years by club legend Felice Borel, who in 1933-34 scored 36 across Serie A and the defunct Mitropa Cup, leading the Bianconeri to the Scudetto in the process.