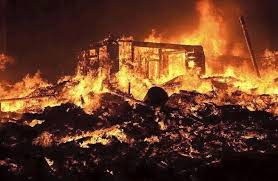 Those who were living around the location called the Lagos State Emergency Management Agency (LASEMA) around 3:13am to come to their rescue. The rescue team arrived to the scene 10 minutes after the call.

The fire was said to have been restricted from damaging further properties accept from the 14 shops and 16 kiosks that were originally affected already.

LASEMA said  “The fire was restricted within affected areas and stopped from spreading further. 14 shops and 16 kiosks were affected.