Kevin Hart mocks site for mistaking him for Usain Bolt 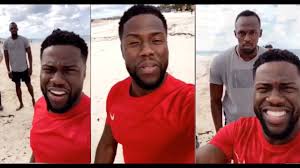 The Hollywood actor and comedian, Kevin Hart, has been mistaken for the fastest man, Usain Bolt.
The online news site NBC for some unkown reasons has put Kevin Hart instead of Usain Bolt. The Hollywood actor was surprised to see his picture used and reporting it about  Usain Bolt’s COVID-19 diagnosis and why anyone in the world will mistake him for the sport man. Being a comedian, he joked about the false news saying that he has developed the talent of running over the night and has gained long legs as well, and was not going to go into comedy again as he has some training to do, funny right. After the actor has made a joke out of the whole issue, he called out the site and said that their actions was disrespectful in many ways.
The comedian wrote on his Instagram handle that “All you can do is laugh. Maybe the COVID-19 shrunk my legs and torso”

One of his fans on Instagram said that maybe the site used it to boost the rate people read and visit their site. The confusion started when the sport athlete was tested positive for  coronavirus after he threw a party. The site has not apologized yet for their mistake anyway. The news was broken by news outlet and  the Social media shared the post till it got to Kevin Hart.